Axiom Verge may very well be the most interesting indie metroidvania of recent years. It’s not most groundbreaking and you can spot where the game’s roots are easily. Still, every element of the game is done competently and is tuned to fit in the whole system. You can’t overlook the fact that whole game was done solely by Tom Happ. Sometimes whole teams fail to not put average pieces in the way of really great ones.

At first glance the game is an undeniable copycat of Super Metroid (perhaps any 2D metroidvania centered around shooting is) with all the foundation taken straight of it: the isolation feeling, save point system, health replenishment particles that some of the dead enemies leave behind, and the eerie vibe of psychedelic 80s sci-fi.

So it goes like this. You are “the scientist” named Trace, there’s an explosion in your lab. You are awaken in the alien world and contacted by Elsenova who is giant war machine representing “species” of Rusalki. They are at war with Athetos a mad scientist destroying space-time. More accurately speaking they lost the war and now you are their last chance. But that are the bits of the story from later on, for now all the instructions you get are

There is a gun in the next room

You must go, now…

So you get out and start exploring. Enemies hit hard encouraging slow and methodical approach. Learning attack patterns and using distance to your advantage keeps you from restarting back at egg-shaped rebirth chamber. You make your way to the next rebirth chamber. You find few upgrades in the process and a new gun, which has a different firing mechanic (making it a highly situational weapon). And then you get to the boss; the slow and tense rhythm fades away.

It all just goes nuts. Boss fights are punctuated with delirious high-tempo electronic music and filled with adrenaline up to the brim. The screen is traced with enemy shots. You dodge and jump. You keep firing. Precision, speed and reaction will get you through first few bosses. Pattern-learning and staying focused will pick up after that. Bosses will have phases with tricky moves and more deadly attacks. You avoid damage and keep shooting watching how your enemy slowly turns red. All of this just turns itself into red pulsating blur.

It's like a ballet tuned to a very odd sound

And then, when it seems that it just never gonna end, that it will continue going on and on like this forever… the boss just explodes into a thousands of red health-replenishing particles.

The rhythm slows down again. You proceed further to keep on exploring. This is a simple loop of going through building up tension to climax points and back to calm concentration. You’ll collect more items, more weapons. You’ll meet . Piecemeal storytelling: cryptic dialogues and ciphered messages. Backstory takes significant effort to uncover itself. Same for some of the most powerful weapons.

Constrasting tone is in no small part soundtrack’s achievement

Somewhere around the middle of the game Axiom Verge suddenly plays homage to Blaster Master repeating one of its key mechanics in reverse. Trace is granted an ability to launch a miniature remote-controlled drone to explore narrow spaces. Most innovative though is the Address Disruptor. The Glitch Gun. You fire it in a cone in front of Trace and it lets you pass through inaccessible wall (by evaporating them). Or it changes the properties of your enemy. Or it materialises a platform hanging in the air. It glitches. Magic happens. 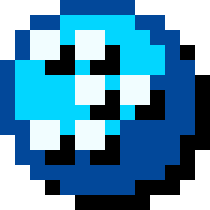 The most frustrating puzzle of the game is its fault too

The game’s most amazing secret though is its very well hidden procedural-generated dungeons system. The existence of such a system within the game is what defines its author’s dedication to traditions of the genre. It’s this little details like a special mode for speedruns with some thought put into it that make a metroidvanian labyrinth interesting to explore, not just pass by.